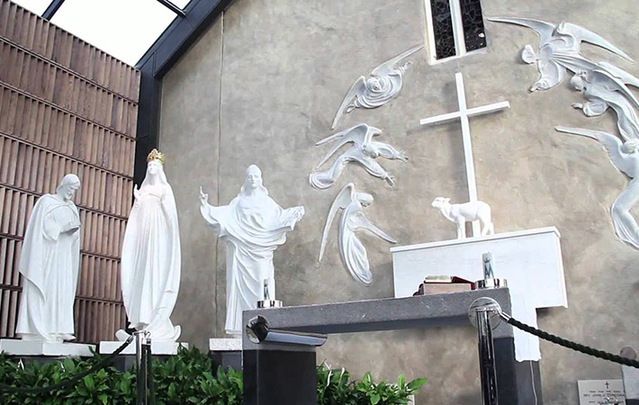 More than 2,000 people showed up at Knock Shrine on Saturday after a 14-year-old boy claimed he was told to expect a vision of the Virgin Mary.

The traveller teenager had been at the shrine in Fatima last May with his family when he reportedly saw visions of the Virgin Mary and other, the Irish Independent reports. During the visions he was told to expect the Virgin Mary at Knock where she would bless everyone present.

Reports of his experience spread via social media throughout the traveller community.

In an audio message posted online, the teen’s father described what the youngster had experienced in Portugal

“For two days our son seen Our Lady in Fatima and he seen the visionaries,” he said.

“The visionary from Medjugorje was speaking to him in Portuguese and [boy’s name] was able to understand every word out of her mouth, he got that gift to understand any visionary.”

He added: “On the 10th of June we will be going to Knock and whoever wants to come is welcome. Our Lady will appear to [son’s name] there.”

“What it is, is that Our lady will appear on the ground there to,” he said “and she will bless everyone on the ground”.

“He won’t be doing it individually – whoever wants to be there at three o’clock Our lady will come down, I can’t say if the three visionaries will be there, but I know Our Lady will be there.

“It’s out there for everybody out there who believes in it and who doesn’t believe in it, but what I am telling here is the truth.

“If you want to be there on 10 June everyone is welcome.”

He added: “At the moment I’m feeling stressed, my own woman is feeling stressed. It’s a lot to take on what’s happened in the last few days with my young fella he’s only 14 years of age.”

“I’m asking everybody out there to say a prayer for him as well and us.”

The vision was due to appear at 3pm, but there were no reports of a vision at Knock yesterday.