Evidence is mounting that we are all Martians. According to new research presented at the annual Goldschmidt geochemistry conference in Florence, there is compelling evidence that life on Earth was kick-started by a meteorite from Mars bearing simple, RNA-based organisms. Furthermore, the same research also indicates that the ancient, primordial surface of Earth would’ve been inhospitable to the formation of the building blocks of life (RNA, DNA, and proteins) — therefore, the only way that life could’ve begun more than three billion years ago is if it arrived here from Mars. 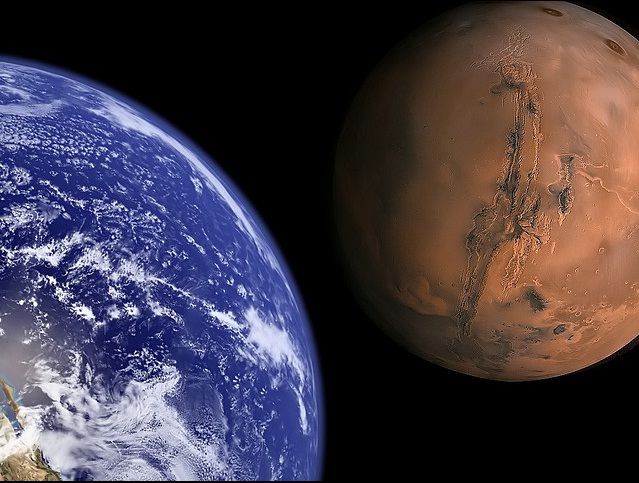 As far as we know, life began on Earth roughly 3.5 billion years ago. The leading theory on how life begun is abiogenesis — that life spontaneously formed from organic compounds, which themselves spontaneously formed. What we don’t know is whether abiogenesis occurred here on Earth, or whether it occurred elsewhere in the universe and then was deposited here via a meteorite (exogenesis/panspermia). Now, according to the findings of Steven Benner of The Westheimer Institute for Science and Technology in Florida, conditions here on Earth would’ve made it impossible for these organic compounds to make the leap to life — while the conditions on Mars would’ve been just right.

Basically, Benner postulates that RNA — the single-stranded, non-helical version of DNA that was probably the first building block of life — could only have been created in the presence of highly oxidized molybdenum and boron. Boron minerals could’ve helped early organic compounds to form into carbohydrate rings, and oxygenized molybdenum could’ve acted as a template for forming those carbohydrates into ribose, and thus RNA. An artist’s concept of Mars’ west hemisphere, billions of years ago, when it still had its oceans and atmosphere

According to Benner, three billion years ago, back before Earth had an oxygen-rich atmosphere, this form of molybdenum wasn’t available. Likewise, Earth was completely covered in water, and boron is currently only found in extremely dry places. On the other hand, four billion years ago — long before life is believed to have started here on Earth — we believe that Mars had an oxygen-rich atmosphere and dry areas where boron could form in high concentrations. If simple RNA-based organisms did actually form on Mars, then it wouldn’t be too hard for it to hitch a ride to Earth on a meteorite.

This theory, if it’s correct, raises an interesting question: If life started on Mars, where is it now? Mars once had an atmosphere and surface water, but lost both a long time ago. We know that life is incredibly rugged, though, and capable of surviving in some of the most inhospitable environments imaginable, such as the vacuum of space or in darkness under miles of ice. If life did form on Mars, it’s entirely possible that it’s still there. Unfortunately, our current crop of rovers, such asCuriosity, aren’t outfitted with microbe-hunting gear — but the next rover, due to land on Mars in 2020, will have a microscope and other tools to search for fossils and other bio-signatures.