The statue’s head and broken torso were recovered buried in a construction a pit by a team of German and Egyptian archaeologists. The discovery was made in Cairo’s Matareya district on Thursday and was reported by Almasry Alyoum. Matareya is where the ancient Egyptian city of Heliopolis once stood and archaeologists believe the newly discovered eight-meter tall statue could be a tribute to a pharaoh Pharaoh Ramses II who ruled Egypt between 1279-1213 BCE. 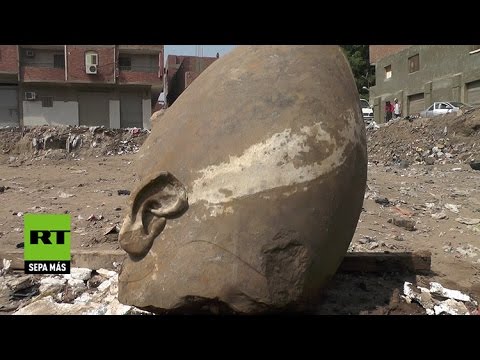 Although no markings specifically identifying Pharaoh Ramses II exist on the artifacts, the fact they were found near Ramses Gate suggests it might be a statue in his honor.

Dr Dietrich Raue, from the University of Leipzig professor and the German team lead, said quote “The area in Matareya had been under investigation since 2001. The statue was found in one of the last squares that had not been excavated yet,”.

Dr Dietrich Raue stated that it was likely to have been erected at a temple in Heliopolis around 1250 BCE: “Ramses II often used statues of earlier kings, so when the statue is taken out, research will start to prove, whether it is reused or not.” Victory at the Battle of Kadesh, in which Egyptian forces outmaneuvered their Anatolian enemies, has been attributed to Pharaoh Rameses II, who is often depicted riding a chariot in ancient artwork. Pharaoh Ramses II is also known to have had 200 wives during his reign.