In fall 2011, my partner Kevin was working on a film called Blaze You Out.  One of the scenes took place in a carved sandstone cave located near Espanola, New Mexico, that is known as The Tree Cave.  Kevin took a bunch of photos of this amazing cave – one of which we blew up on canvas and have hanging in our dining room – and he also got the opportunity to talk briefly with Robert “Ra” Paulette, the artist who’d singlehandedly sculpted the cave out of soft, naturally occurring sandstone.  Ra shared how this was one of several caves he’d created in Northern New Mexico as a labor of love and a gift to his fellow New Mexicans.  He sees them as wilderness sanctuaries that can help modern humans connect with their innate emotions. 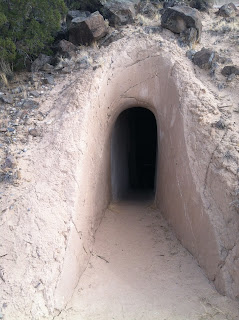 It’s a little hard to understand how a cave could do that unless you see one of Ra’s creations for yourself, which is exactly what I did last weekend.  After much build-up, we finally took a day trip to see The Tree Cave along with two friends.  One was a friend who’d inquired about the photo in our dining room and expressed a keen desire to visit the cave.  Another was a friend who grew up in Taos and was the only person thus far who had recognized the photo in our home and was familiar with The Tree Cave.  So the four of us headed out on our mission to experience or revisit this awe-inspiring work of art that’s unmarked, hidden and known only to those who, well, know. 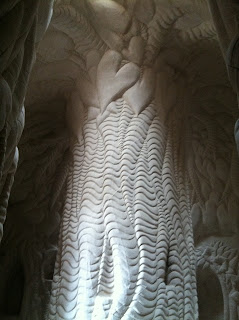 Hiking up to the cave from the road, you are surrounded on all sides by regal sandstone formations, all jagged and crumbling.  It becomes quite clear how Ra picked this spot, as the creamy-colored sandstone is incredibly soft and malleable.  (That’s what allowed him to dig out the cave, which he does all by himself until he gets tired.  Then, as he told Kevin, he gets some folks to help him cart away the excess sand.)  The first sign of something unusual is a cluster of skylights in the hillside far above, which illuminate the cave with light and shadows.  Then you see the long, narrow entrance, and after passing through, find yourself in a massive chamber with a huge “tree trunk” column in the center.  The ceiling is so high (20+ feet?) that you have the feeling – and acoustics – of a cathedral. 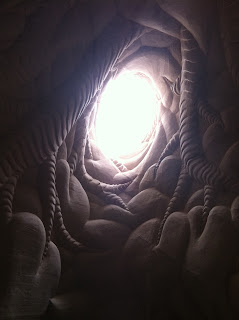 But it’s really what’s on those ceilings and walls that I find hardest to describe (and thus I refer you to the photos).   Creeping tree branches are carved in fluid patterns and interlaced with hearts and flowers, the two secondary motifs of the cave.  There are also a number of carved benches and seating alcoves, allowing you to sit down or step into a more intimate space for reflection.  Wall niches occur throughout and have been decorated with candles and offerings from visitors, including rocks, flower petals, movie tickets and rosaries.  One has also been claimed by a resident bird for her nest. 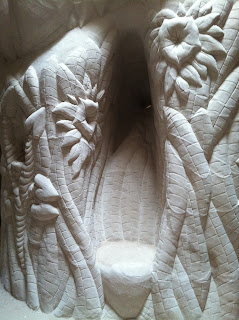 Sitting in one of the recessed benches, I noticed that my voice was magnified within the niche, despite talking in a whisper.  This is one of the many atmospheric elements of the cave, like its cool air and the way the skylights highlight various carvings as the sun moves.  Looking around, I felt the tree branches started to look more and more like the ribbing on the interior of a human’s intestines.  Perhaps this was because I felt enveloped in this magical experience.  Looking at the myriad hearts carved into the gritty walls, it felt like I was inside “the lower intestine of love.”  Unlike other art that you look at and witness, this is art you can walk around in, touch, live and breathe. Upon stepping back outside of it, you can’t help but be transformed.  You walk out into the hot, bright day marveling at mankind’s potential to be truly loving and giving. 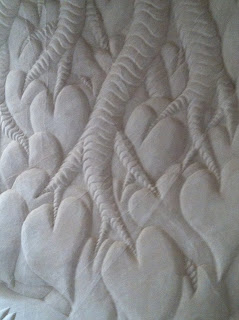 Now, I’m sure that makes me sound like a real new age New Mexican, but it’s proof that Ra’s goal of creating surprising emotions and thoughts with his caves is not that far-fetched.  The Tree Cave is a very, very special place, and I am humbled that I was able to experience it.  I’ve since learned more about Ra Paulette in an oral history I found online.  Surprisingly, however, this was one of only 10 results in my Google search for information about him.  (The only major media coverage I found was an LATimes article from the 90s.)  He is a professed hermit, and it seems he likes it that way. 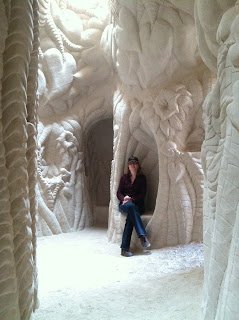 Initially, before I visited, I wondered why Ra didn’t lead tours or charge admission to the caves he’d spent years creating (for example, two to three years per cave), but now I understand how antithetical that idea is to his artistic philosophy.  He no more owns the caves than the private or public land they were built on.  They belong to New Mexico, and I only hope that future owners of the land will continue to honor that. 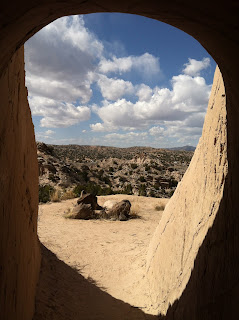