Humans often think they are in control of every aspect of their lives. But sometimes, a question is thrown at them to make them think about whether they are: these come in the form of conspiracies. However, some conspiracies are too dark; too gruesome to believe that it is a real aspect of life that is occurring somewhere in the world, rather than a make-believe story made to go viral and earn viewership.

Humanity. Here’s some news for you: You’re not in control!

However, just stop and think for a second: What if that was the whole point? The whole point is to make the very people whose opinions matter scoff at this piece of “conspiracy” article, subconsciously labeling the author as a lunatic? This allows the elite to rule the world in their favor forever because nobody would believe the word of a “lunatic” that writes conspiracy articles.

The world is ruled by black magic by elite groups such as The Bohemian Club, most notable for its US President members, such as Richard Nixon, Ronald Reagan, and others. Yale University has its secret club of elite members, known as Skull ‘n’ Bones. Late Professor Anthony Sutton did extensive research on the secret society, discovering that certain members had confessed weird initiation rituals, such as making sexual confessions in a tomb, which is the creepiest.

Most would probably think secret societies are merely perverted individuals with a sick mind. But we first have to ask this question: Why are people in a position of power always the suspects of being a member of secret societies? These people have more wealth than any common man can imagine, but the answer is that they want more power. Money is only and a means to an end to reach their physical goals: world domination.

People who are initiated into a satanic secret societies will never be a common man. They always have to be in a position of great power and wealth. However, there are a few who dare to step into this forbidden world just to find answers: just like the late Stanley Kubrick. He was said to participate in US Government’s fake Apollo moon landing back in 1969. He released a film called “Eyes Wide Shut,” and was found dead four days after he handed over the tape. His family and friends all claim he was in perfect health at the time of his death.

A film from Stanley Kubrick’s film, where a sexual ritual is depicted. It is said that black magic is practiced in the ritual and the women are sacrificed 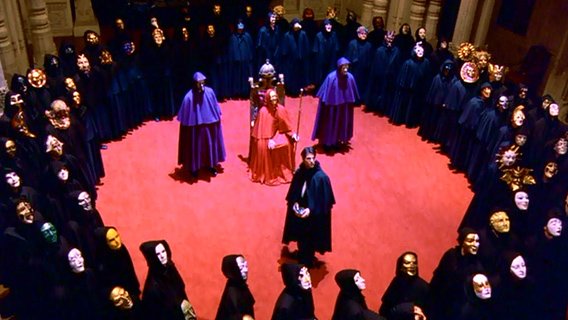 Missing children are also part of the entire plot, which makes everything more horrific. It is said that children abduction is planned by these very same secret societies for sacrifice.

What can free and good humans do about this? Always remember this: Symbols are always more powerful; as they appeal to the subconscious mind. Do not let it get to you. Companies and their logos are created in a certain way to always maintain their power as they have pledged their allegiance to certain secret societies/ black magic. Know what you are buying, and where it comes from.

If black magic exists, so does white magic. We only need to believe in this horrors and move. Speak up. Get out there and spread the word. Use your voice.