Imagine if scientists discovered that an asteroid was hurtling toward Los Angeles.

The possibility has existed on the pages of Hollywood scripts. But in what may be a case of life imitating art, NASA, the Federal Emergency Management Agency and other government agencies engaged last month in a planetary protection exercise to consider the potentially devastating consequences of a 330-foot asteroid hitting the Earth.

The simulation projected a worst-case blast wave by an asteroid strike in 2020 that could level structures across 30 miles, require a mass evacuation of the Los Angeles area and cause tens of thousands of casualties.

In 1998, the movie “Armageddon” dramatized an even greater fictional threat. In that blockbuster, a ragtag crew was sent on a mission to drill into an asteroid and set off a nuclear bomb to avert a global catastrophe. As the character Harry Stamper, portrayed by Bruce Willis, summed up to his crewmates: “The United States government just asked us to save the world.”

Don’t expect the need for such Hollywood heroics in real life, however. An asteroid that could cause such damage has no significant chance of striking Earth within the next century, Paul Chodas, manager of NASA’s Center for Near-Earth Object Studies at the Jet Propulsion Laboratory in Pasadena, Calif., said in an email.

The center relies on several telescopes, such as the Catalina Sky Survey at the University of Arizona, to track potentially hazardous asteroids and comets. These objects, which are leftover matter from the formation of planets, can come dangerously close to Earth or cross its trajectory.

The center lists 659 asteroids that have some probability of striking the planet, “but none pose a significant threat over the next century, either because the probabilities are extraordinarily small, or the asteroids themselves are extremely small,” Mr. Chodas said.

“Nevertheless, we must continue searching for asteroids in case there is one that is heading our way,” he added. 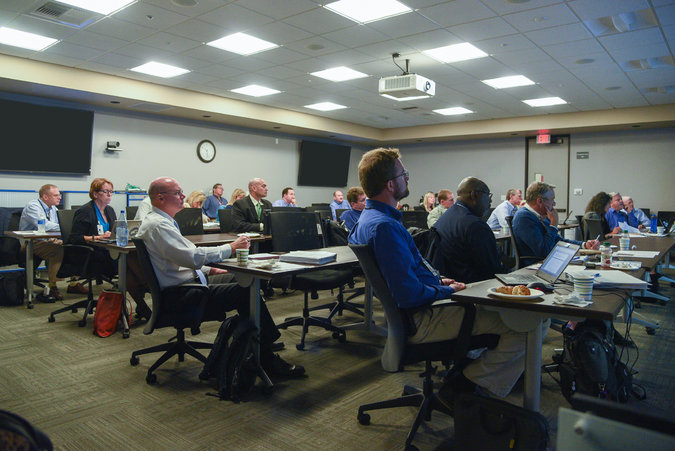 Officials participated last month in an exercise that simulated an asteroid strike over Los Angeles.CreditThe Aerospace Corporation, via NASA

That’s where the planetary protection exercise, conducted on Oct. 25 in El Segundo, Calif., comes in. The simulation that projected a strike in 2020 involved representatives from NASA’s Jet Propulsion Laboratory, the Department of Energy’s National Laboratories, the Air Force and the California Governor’s Office of Emergency Services.

While a warning of four years may seem like a lot of time, it would probably not be enough to deflect an asteroid of the size and orbit outlined in the simulation, Mr. Chodas said.

“Engineers think the simplest way to deflect an asteroid is to build a large spacecraft and simply ram it into the asteroid” years before it is predicted to hit Earth, he said.

It could take up to two years to build such a “kinetic impactor” spacecraft and another year or more to reach the asteroid, so in the case of this simulation, an evacuation, not a “deflection mission,” was necessary.

For the organizers of Asteroid Day, a global movement that seeks to protect the world from dangerous asteroids, such planning is not out of this world.

The group, which maintains that one million asteroids have the potential to strike Earth but that only 1 percent of them have been discovered, was seton Monday to release a letter signed by planetary scientists supporting missions to increase knowledge of asteroids. The group promotes the “100x Declaration,” which calls for increasing the rate of asteroid discoveries to 100,000 per year in the next 10 years.

“The more we learn about asteroid impacts, the clearer it became that the human race has been living on borrowed time,” Brian May, an astrophysicist and a founder and lead guitarist for the rock group Queen, said on the group’s website.

Asteroid Day is observed each year on June 30, the anniversary of what is believed to be the largest space-related explosion in human history: an asteroid strike in Tunguska, Siberia, in 1908.

An asteroid, believed to be less than 100 feet in diameter, exploded at the altitude of an airliner and flattened tens of millions of trees across 800 square miles. Researchers estimated the explosion was as powerful as a medium-size hydrogen bomb and several hundred times more powerful than the atomic bomb dropped on Hiroshima.

While there were no official reports of human casualties, hundreds of reindeer were reduced to charred carcasses in the explosion, the British Broadcasting Corporation reported.

In more recent times, an asteroid exploded over the Russian city of Chelyabinsk in 2013, shattering windows for miles and injuring more than 1,000 people.

Scientists have suggested that the Earth is vulnerable to many more Chelyabinsk-size space rocks. In research published in 2013 by the journal Nature, they estimated that such strikes could occur as often as every decade or two instead of an average of once every 100 to 200 years as previously thought.

Predictions of a catastrophic crash by a celestial object surface with some regularity. In September 2015, the last eclipse of the year fueled imaginative speculation on the internet that a giant asteroid would hit Earth.

In a statement debunking the idea, NASA noted that similar forecasts were made in January and March of that year that two asteroids were on dangerous paths toward Earth.

The agency noted that the asteroids flew by Earth “without incident — just as NASA said they would.”